Here we go!  First project completed.  I have about 5 on the go, including painting “planets” for Village Church’s summer camp.  So fun, but daunting – they still need to look excellent, even if they are for kids. (kids come with judging parents, you know.)  But more on that later.

The first project I speak of was pretty big, but hubs really did all the grunt work.  I just looked pleased or disappointed as the project progressed and pointed a lot.  I tried really hard to look mostly pleased in front of him.  He and a handyman friend did the tiling, and you know, you really need to get pictures of past jobs from handymen, no matter if they are a friend or not.  Just saying.  We all learned alot about tiling from this project, and we will be more prepared when it comes to doing the kitchen when the time comes.

For the most part, I am very happy with the ensuite’s end look, it is very much updated and now the tub, sink and toilet are ALL white.

Here are the ensuite before’s the night we first saw the place: 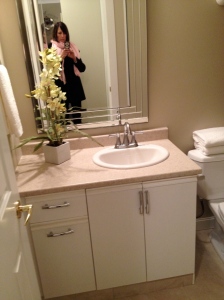 That tub was state of the art 28 years ago when these units were built.  They are a whopping 22″ deep – nowadays they usually run 10-14″.   And it was a good 3 ” wider than the average too.  Sort of a mini hot tub, minus the jets and ambiance of the outdoors.  The tile was pinky beige, with a fab grab bar for a helpful boost from the 22″ depths.  My plumber\co-worker who is a big burly guy was unable to budge that tub.  He usually hefts those things like a small child, but this time he needed help.  As a matter of fact, they had to smash the thing to bits to move it and even those pieces were ridiculously heavy.  I’m pretty sure I heard my name with an unmentionable word or two.  And I can’t even fault them if it’s true.  When hubs took the billion pieces to the dump, they weighed the mess and it came in at 500 lbs!  You read right, 500!!  No wonder most of the units still have the original.

Maybe you noticed too that the counter looks very pink.  It’s because the beige paint they picked for the walls had a green undertone.  From previous posts you may remember I’ve said green and pink bring out the worst in each other, like the housewives of any of those shows.  Perfect example right there.  The vanity doors are the kind with the wood strip very popular in the 80’s.  The former owners were kind of clever by painting out the wood and adding handles, but these will change soon too. 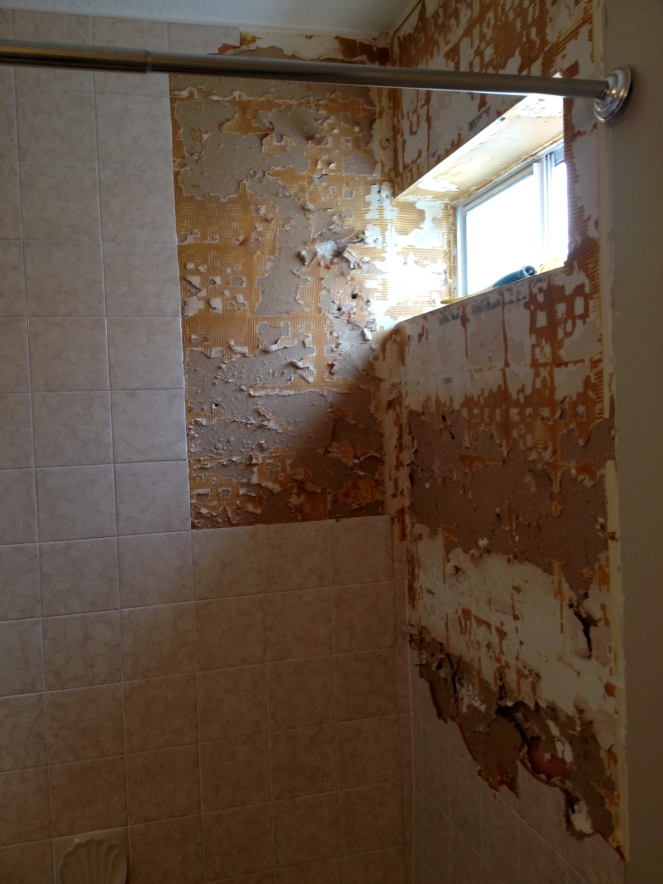 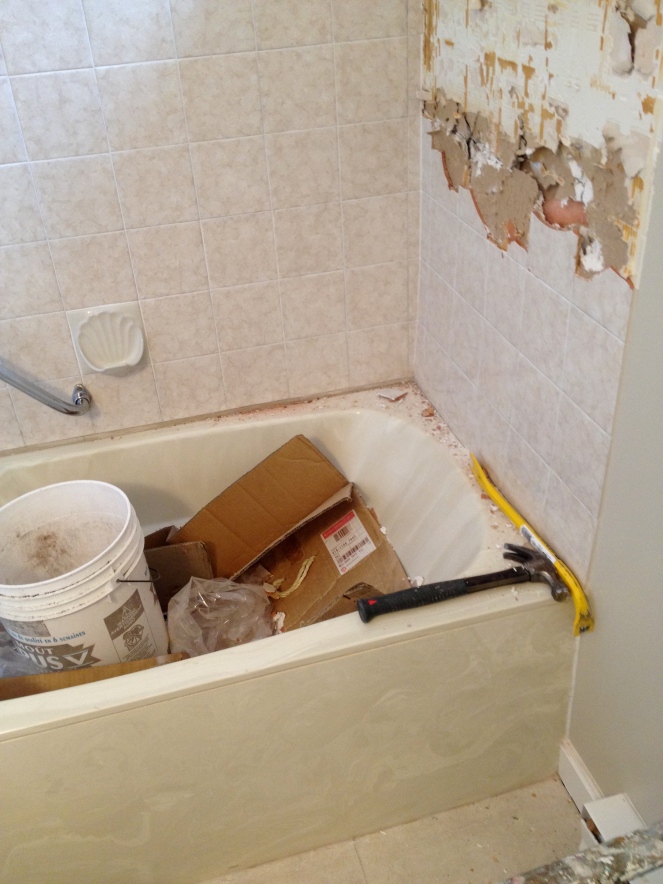 Then this happened.  It was fun to smash and tear down to the studs.  Important to go down to the studs, so you can see if there is any water damage or mould.  Also kind of impossible not to.  Once you start busting a move it kind of goes where it wants to…goodbye seashell soap holder.

New Sydney tub chosen from the Home Depot of course.  Once in I was feeling a little better,  like we were getting somewhere.  Plumber friend chose some snazzy tub/shower fixtures (who knew this tattooed reddish neck had such expensive tastes?) that in the end we are very happy with albeit a little broker.

So lets see if I can make this next part understandable.  Because we couldn’t afford to change the floors and really they are perfectly lovely, I wanted somehow to tie in the creamy light floor tile with the new bathtub tile because as I mentioned before the original tub was about 3″ wider than the new tub.  I decided a good idea would first of all be to use the same grout on the wall tile as they used on the floor tile.  Second I wanted white subway on the walls, so I found a great match in almond subway (both tiles and grout from the Home Depot) to the floor tile to add along the tub edge.  I then added that same subway as an accent stripe on the wall.  What’s super interesting to me is how different the colour of the tile actually looks depending on how you lay it.  On the floor it looks way way lighter than on the wall.  Lighting.  It’s amazingly scientific.

I decided on adding the ceramic corner soap dishes since we had them in the last house and they proved to be very useful and easy to clean.  Keep yer stuff to yerself, hubs

I think this project took about 2 weeks of daily work, not full days every day of course but still.  If you are hoping to have yours done sooner, HIRE A PROFESSIONAL!! 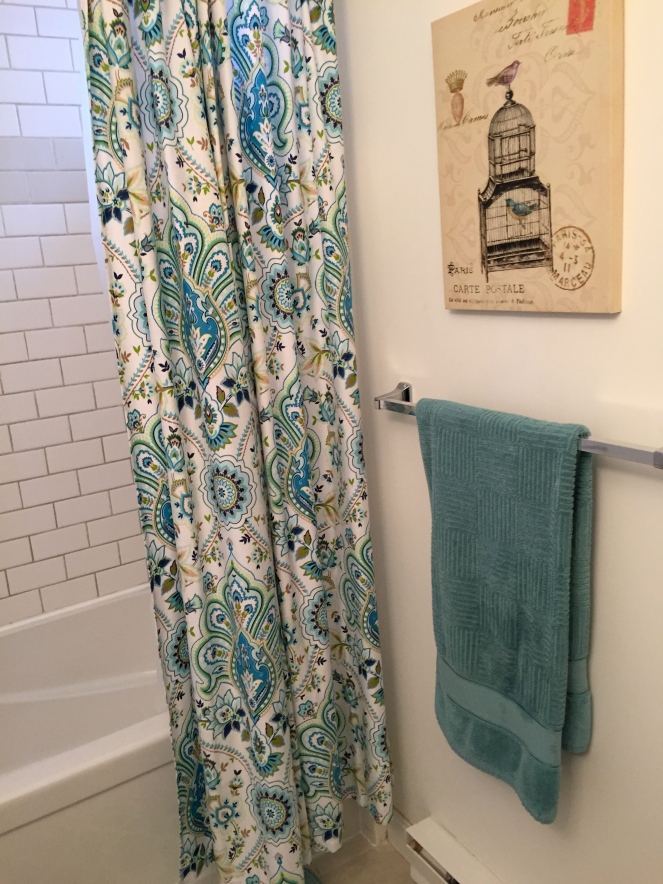 As you can see, the counter no longer looks so pink and  even though stone would be fantastic I think we can handle the laminate after all.  Oh and all the beige paint throughout the house has now been replaced with a beautiful warm white. Worth every stinkin’ penny.  And bless our fantastic painter for not stringing me up every time I made a change to which room how. You’ll see what I mean in future posts.  I’ll remind you about how indecisiveness can work to your advantage, even if it means people call you insane (even if it’s not out loud).

The kitchen cabinets will be refaced this month if all goes according to plan (by a company called Renuit that you can sign up for at (of course) Home Depot ) and we sprung in enough dollars to do the vanity cabinets in both bathrooms as well.  They will be a high gloss white like the little medicine cabinet from Ikea we added above the toilet.

A little side note, here are some of the paper lantern planets I painted for the Village Church kids camp.  Lots of spray paint, glitter, craft paint, silly string, stickers, styrofoam and cotton balls did the trick!

4 thoughts on “Bathtub Blues ? Perhaps Not.”

Just Wunderlust
VivaLaVintage - For Your Home

Lifestyle of the Thrift and Famous

make yourself at home

Seeking the beauty found in the midst of chaos

Muma On The Edge

I'm a Muma on the Edge, sometimes over it - blogging my way back to sanity. Wine helps!

A life of harmony with pearls of wisdom

at home and in life

Life is all about the little moments and the little things, I share mine here in my Castle of Dreams

Just Something I Whipped Up

The latest news on WordPress.com and the WordPress community.

Just another blog about home, pics, and trips. Followers beware: I don't know where I'm going.